How Nando's keep their social strategy cheekily simple, to great success in the engagement stakes
A
Written by Amy Rountree
Updated over a week ago

Fancy a cheeky Nando’s? Don’t we all? Nando’s success on social media is owed to it using an impressively simple and appropriately cheeky social media strategy to engage customers.

Here we're showing you how Nando’s engages its audience and prioritises customer feedback and engagement over content creation without losing any of the sauce it’s famous for. Apply a similar logic to your social media content and you'll be dining out on a similar social success in no time.

Tracking your engagement shows you what content is working for your audience and what is inspiring them to communicate with you.

Nando's keeps its social media strategy simple, just like its menu. It doesn't create endless content. Over a two week period, Nando's only posted nine times to social media, but the content earned over 65,000 engagements. When Nando’s does post; its content is hotter than an XX-hot chicken wing with a side of wit and banter. 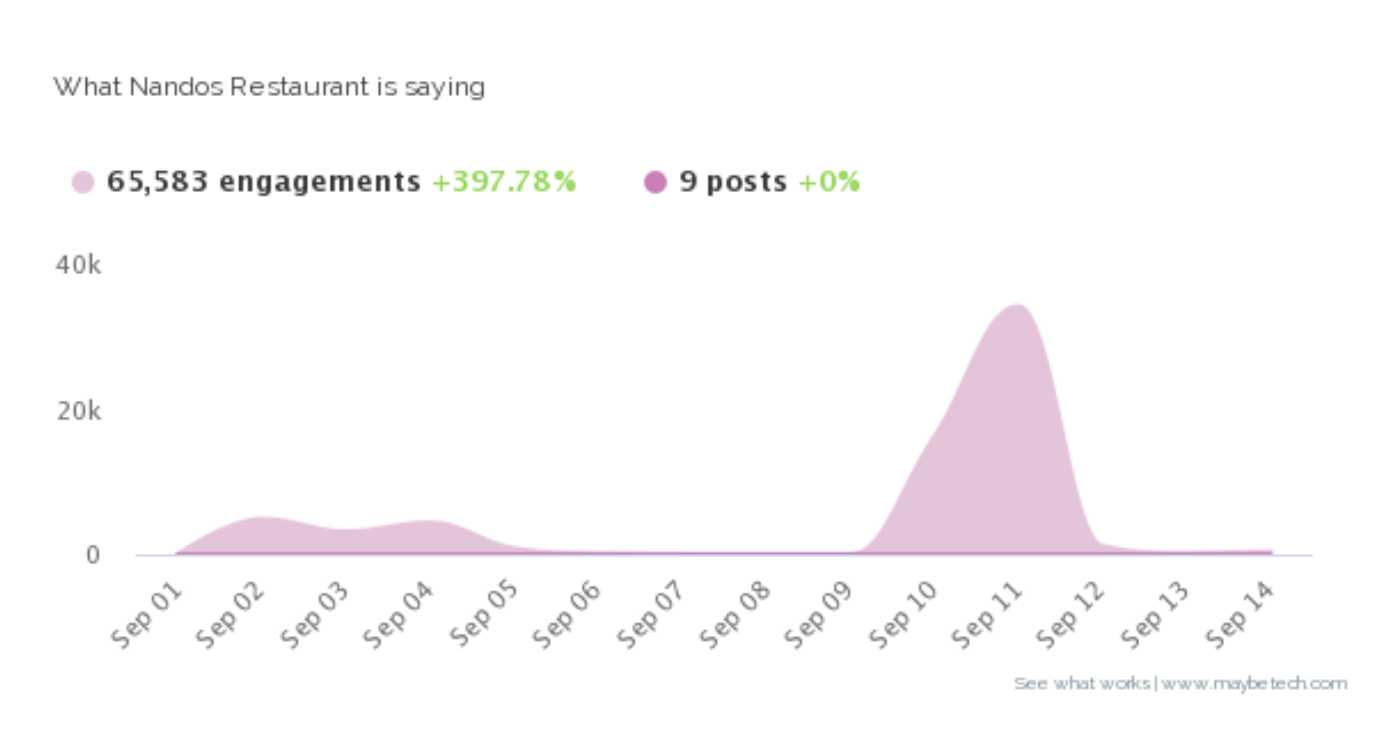 Pithy one liners, or jumping on the news cycle where relevant, and chancing a laugh with it, Nando’s has social media humour down.

While tongue in cheek might not be right for every business, talking to your customers personably, and as you would a friend, helps you develop a human voice on social.

Know how much customers talk about you

While Nando’s does not create a lot of content itself, customers really go to town. Through the first two weeks of September, Nando’s chicken-loving customers took to social media 90 times more than the business itself.

It’s not just sit-in diners that drive Nando’s conversation. With a line of supermarket sauces, the brand also benefits from foodies and fitness fanatics cooking up a social media storm. 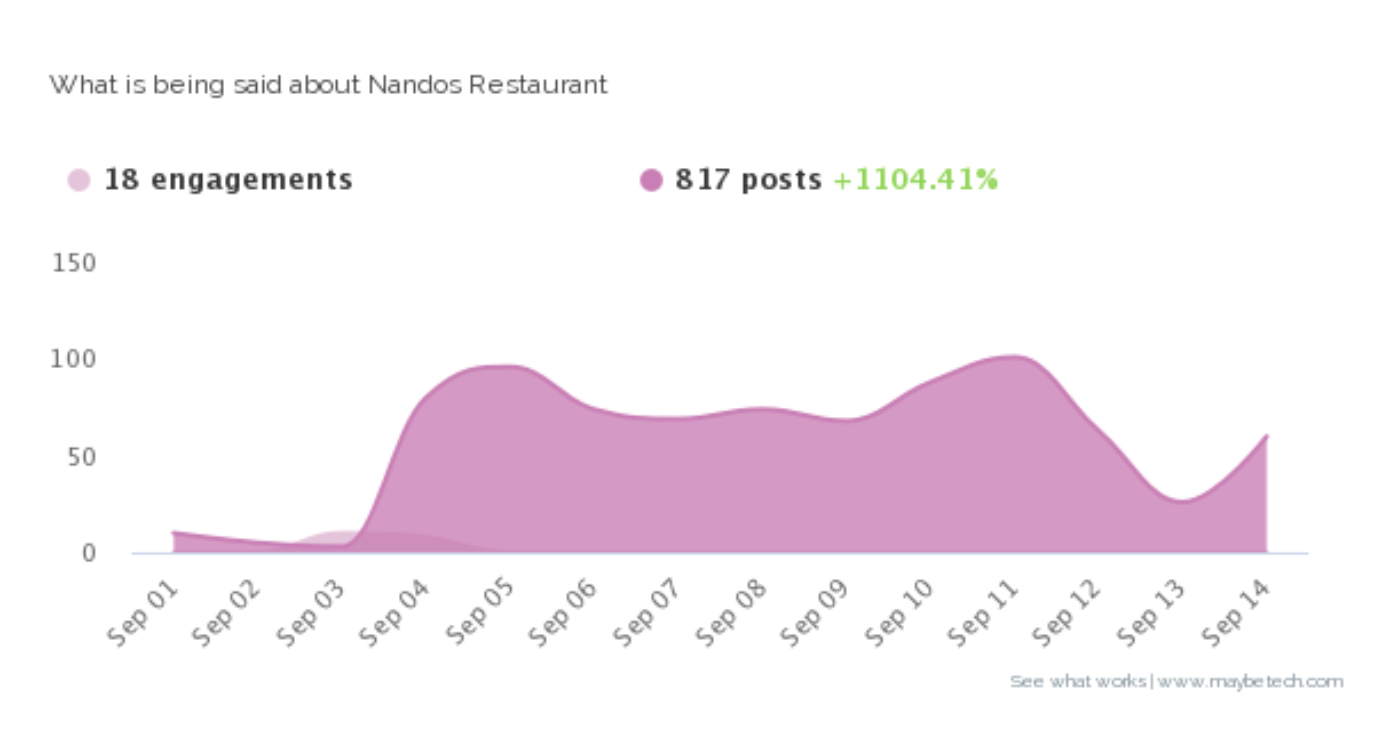 Engaging with social media content created by your customers builds loyalty and should form part of a great social media strategy. Re-sharing content from your customers shows them some serious love. You can incentivise this via a contest mechanic if you really want to build a groundswell of customers creating content about you.

What are your customers saying?

The conversation about Nando's naturally features the words 'chicken' and 'orders' and 'restaurant'. It also features words like ‘been’ and ‘back’. This tells us that customers regularly talk about Nando’s as something they are doing.

The high volume of content about Nando’s is caused largely by interaction on the brand's Twitter account. Any feedback about visits or restaurants visited is shared there, and responded to by the Nando’s customer care team.

Elsewhere ,the conversation around slimming is a big driver of conversation about Nando’s. Whether it’s making a ‘fakeaway’ at home or nipping out for a treat that doesn’t break the calorie bank, there is a surprisingly successful crossover with fitness and nutrition. 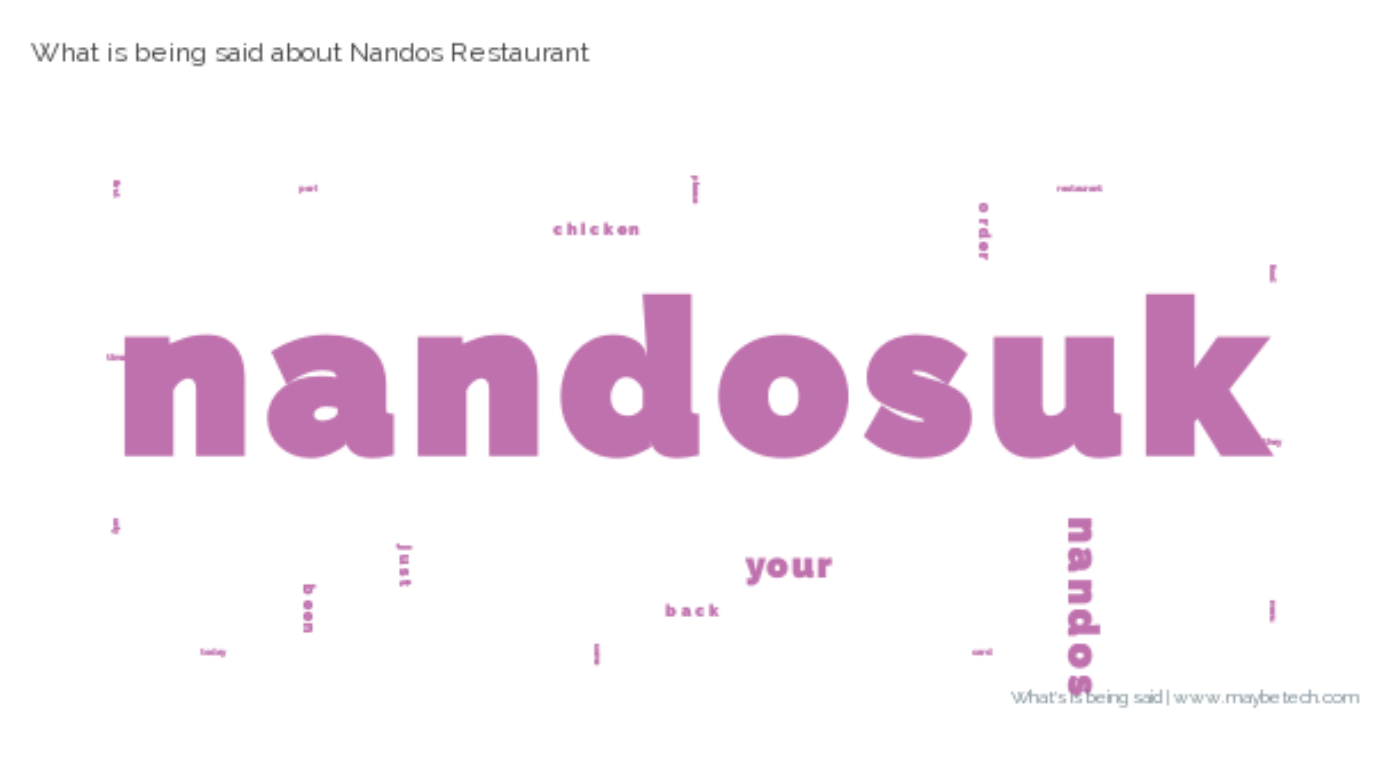 Knowing where there is a crossover in interests or customer needs between your business and other brands, or other categories helps you understand who your customer is and what else they care about.

Listening to the conversation about you will help you identify these customer passion points. This information can help you more efficiently target ads, or create content that resonates deeper with your audience.

How do your customers feel?

Tracking the sentiment of the social media conversation about you shows you how positively you are seen. You can engage with both positive and negative feedback, and importantly, learn from it.

September 11th saw a big spike in positivity as Deliveroo announced Nando’s was joining its ever-growing list of restaurants it delivers.

Overall Nando’s see an equal amount of positive and negative sentiment. Where negativity occurs, it's usually from customer feedback on Twitter. And no business, especially one the size of Nando’s, is going to make it through the day without the occasional moan and groan. 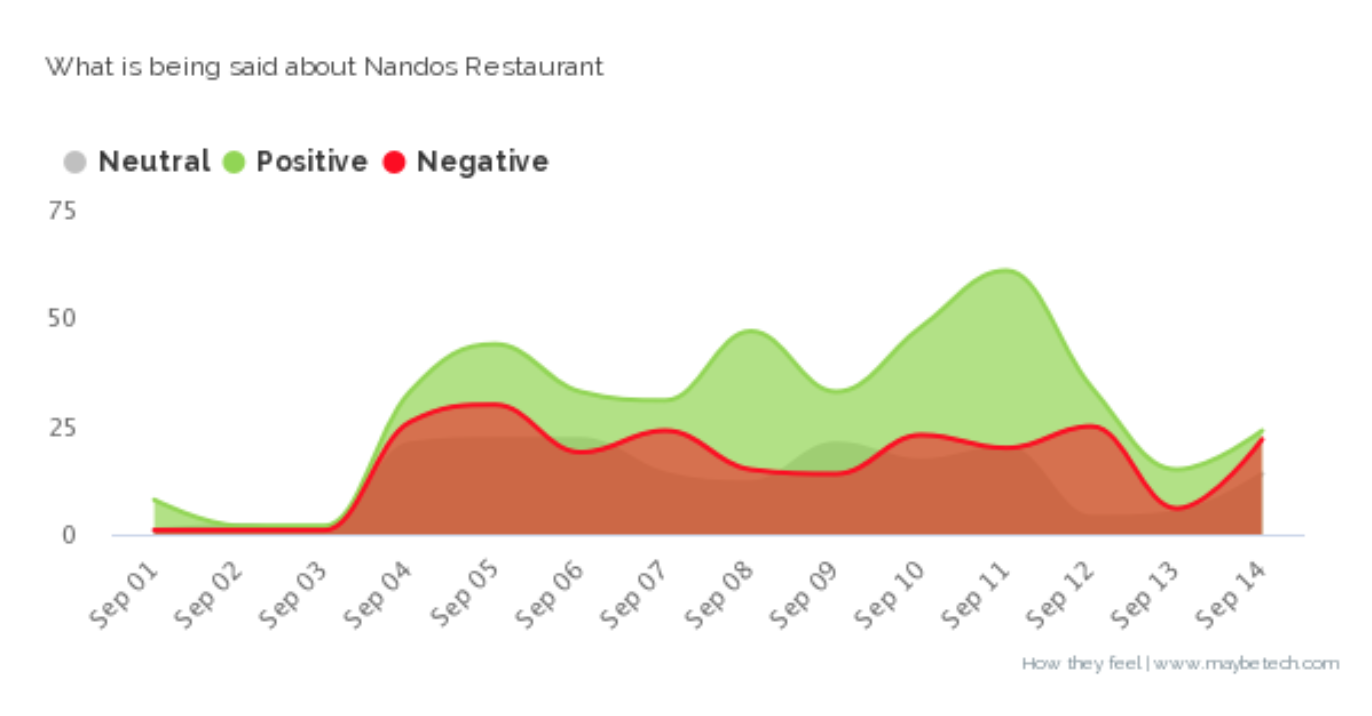 Nando’s bosses make their way through any negative customer feedback. You don’t need a huge customer care team to replicate this element of Nando’s social media strategy. Simply respond publicly to every single piece of feedback, and then divert the complaints to a private conversation via DM or email to resolve privately. 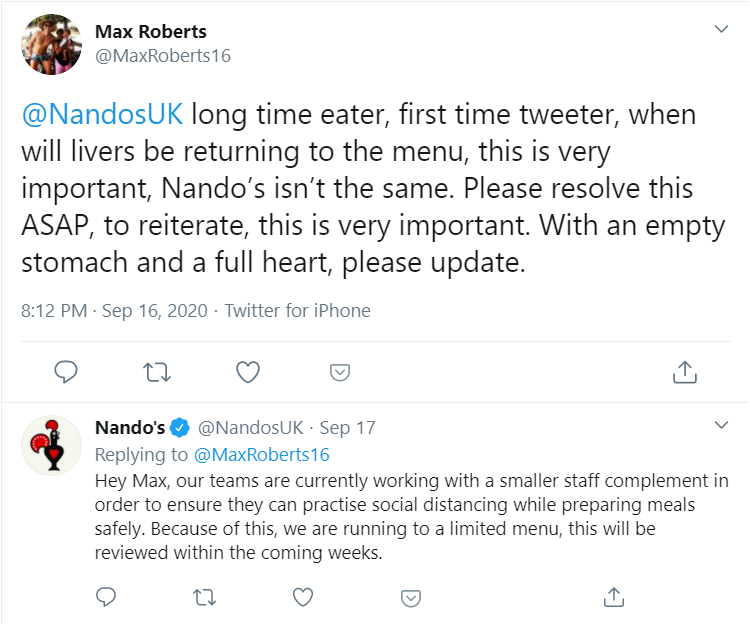 Keep it simple, but never plain. Nando’s goes easy on the posting and focuses efforts on engaging with customer feedback. When Nando’s does post, its tone of voice is in keeping with what you would expect from a restaurant whose name is often pre-fixed with 'cheeky'. Adding humour and personality in keeping with the brand while delivering responsive engagement makes for a simple but effective social media strategy that you too can deliver on.

Be more Nando's. We're making the Nando's conversation free for everyone.

New to Maybe*? When you sign up to Maybe* Nando's social media data will automatically appear in your Maybe* dashboard. You can keep track of the master brewers, benchmark their performance against your own and take a sip of their success.

Already signed up? Don't worry you'll still get the freebie. You'll find the Nando's conversation ready for you to add to your Maybe* account located in your recommendations.